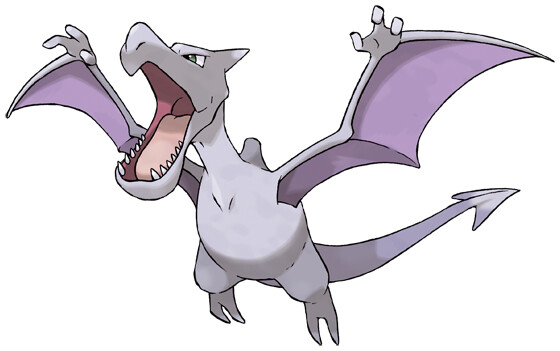 Aerodactyl is a Rock & Flying Pokémon. It is vulnerable to Rock, Steel, Water, Electric and Ice moves. Aerodactyl's strongest moveset is Rock Throw & Rock Slide and it has a Max CP of 2,783.

"Aerodactyl is a Pokémon from the age of dinosaurs. It was regenerated from genetic material extracted from amber. It is imagined to have been the king of the skies in ancient times."

The addition of Rock Throw from the July 2019 move rebalance improves Aerodactyl's damage output as it's the only option that benefits from STAB. Bite is a very niche way to deal with the popular bulky Psychic and Ghost-types like Cresselia or Giratina, but this shouldn't be Aerodactyl's primary role.

Rock Slide is the best charge move for Aerodactyl, gets STAB, costs less energy compared to other options, and sees the most frequent use by a long shot. Earth Power can be used to cover Aerodactyl's vulnerabilities against Electric, Rock, and Steel-type foes, but costs more energy. The rest of Aerodactyl's charge moves are disappointingly bad.

Aerodactyl is one of the most unusual contenders in PvP, if it can even be considered a contender at all. With an offensive-based stat distribution that results in relatively low bulk, and a Rock/Flying typing which gives five weaknesses to common typings, Aerodactyl might just end up fainting faster than any meta pick in PvP. A cumbersome moveset also ruins Aerodactyl's dreams of soaring to new heights which is rather unfortunate. The only significant use so far has been the GBL Season 4 Flying Cup.

A higher CP cap in Ultra League benefits Aerodactyl's offensive stat, but not enough to give it sufficient wins against the meta. Even with Bite, Aerodactyl still loses to the bulkier Psychic tanks like Cresselia. Consider other options.