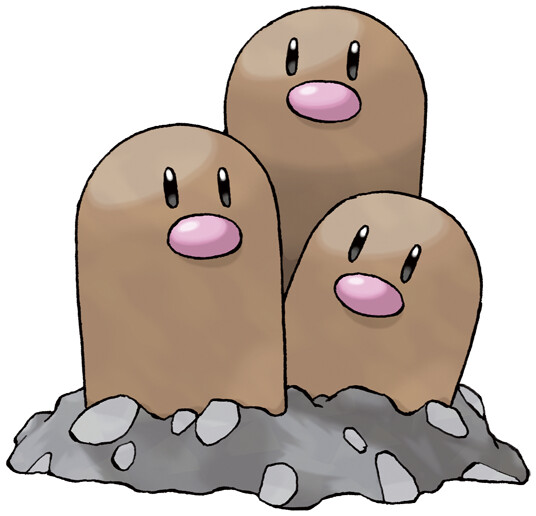 Dugtrio is a Ground Pokémon which evolves from Diglett. It is vulnerable to Water, Grass and Ice moves. Dugtrio's strongest moveset is Mud-Slap & Earthquake and it has a Max CP of 1,567.

"Dugtrio are actually triplets that emerged from one body. As a result, each triplet thinks exactly like the other two triplets. They work cooperatively to burrow endlessly."

Mud Shot is a legacy move that is not obtainable through Elite TMs, however it is recommended for its superior energy generation that's needed for Dugtrio's costly charge moves. Mud Slap generates energy much more slowly, and deals superior damage output as a compromise. Sucker Punch sports average energy gains and damage output, but lacks STAB.

Mud Bomb costs the least amount of energy, gets STAB, and can be used frequently. It is generally more consistent than Earthquake, due to the latter's significant energy demands, though having a powerful KO threat is also quite valuable. Stone Edge is provides wide Rock-type coverage, though it is somewhat costly to use.

Dugtrio is a Ground-type Pokemon with high offensive stats and consequently poor bulk. Its niche is mainly to provide wide Ground-type coverage against various Pokemon that are weak to it. Dugtrio also competes against Pokemon with similar performances to it, such as other "mud" style Pokemon like Whiscash and Stunfisk. However, Dugtrio doesn't bring anything new that other Ground-types already provide, causing it be benched more often than not.

Dugtrio lacks stats to compete outside of Great League.

You really think you can compete against Groudon?