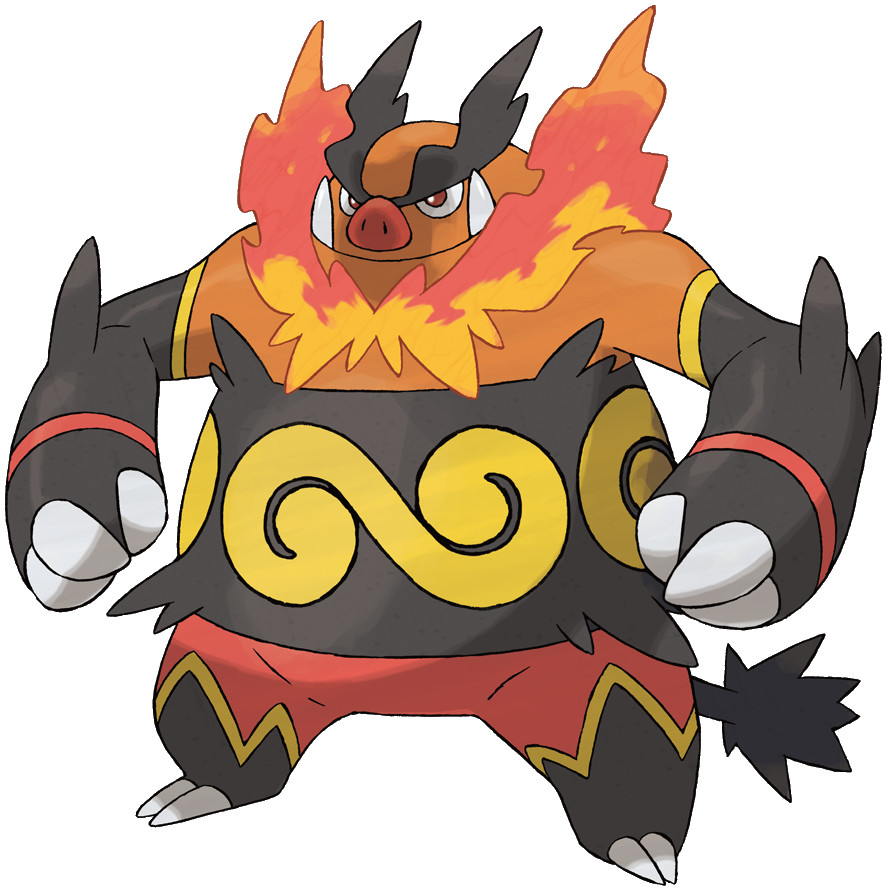 Emboar is a Fire & Fighting Pokémon which evolves from Pignite. It is vulnerable to Flying, Ground, Water and Psychic moves. Emboar's strongest moveset is Low Kick & Blast Burn and it has a Max CP of 2,982.

"It has mastered fast and powerful fighting moves. It grows a beard of fire."

Ember is the superior choice due to poor performance from Low Kick.

Rock Slide is mandatory due to its lower energy cost, good coverage, and respectable damage output. Blast Burn is limited to Community Day events and Elite TMs, but deals significantly more Damage Per Energy (DPE) than other Charge Moves available, and is very strong with STAB, even when resisted. Flame Charge isn't particularly strong, but benefits from STAB, and is primarily chosen for its consistent +1 ATK buff even when shielded. Focus Blast is too expensive to use energy-wise, but its wide coverage and high damage can surprise opponents. Don't use Heat Wave, it's bad.

Emboar lacks bulk and has inferior movesets compared to various meta picks that compete for its role. Losses against Pokemon that it shouldn't lose to typing-wise (such as Tropius and Meganium in 1-shield matchups) makes it largely unviable. Flame Charge can be more consistent and improve certain matchups than Blast Burn when shields are available, but Emboar likely won't benefit from the ATK buff long enough due to how fragile it is.

Emboar is still largely outclassed by existing meta Pokemon, despite gaining the powerful Blast Burn following its Community Day event. Wins against most Grass and Bug Pokemon are to be expected, but struggles vs Exeggutor (especially the Shadow variant) and losses against majority of the meta makes Emboar almost useless. Rock Slide enables Emboar to 1-shot Charizard, but Talonflame's faster energy generation denies Emboar a win by outspeeding it to the Charge Move in all even-shielding scenarios, even without baiting. For an off-meta pick similar to Emboar, consider Blaziken for its faster moveset and access to the superior Fast Move Counter.

A max CP of 2982 isn't particularly impressive compared to many of the legendary and pseudo-legendary Pokemon that exist in this league. Emboar's poor moveset is still its major drawback, with struggles against much of the meta even with certain typing advantageous matchups.