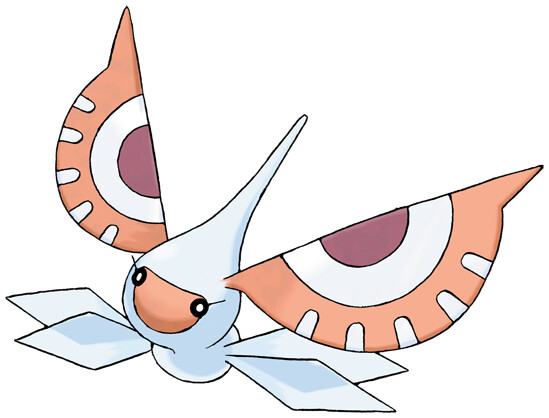 Masquerain is a Bug & Flying Pokémon which evolves from Surskit. It is vulnerable to Rock, Flying, Fire, Electric and Ice moves. Masquerain's strongest moveset is Air Slash & Silver Wind and it has a Max CP of 2,270.

"Masquerain intimidates enemies with the eyelike patterns on its antennas. This Pokémon flaps its four wings to freely fly in any direction—even sideways and backwards—as if it were a helicopter."

Lunge is the main charge move of choice, dealing decent STAB damage while ensuring a guaranteed ATK debuff on the opponent. Bubble Beam can debuff the opponent's ATK for 5 less energy, but its damage is pathetic. Silver Wind is redundant due to its worse damage output, and the small 10% chance to proc is self-buff is unreliable. Air Cutter is a very poor move that demands a moderate amount of energy to use, but at least it gets STAB.

Masquerain is mainly used for debuffing opponents, which can be somewhat useful given switch advantage. However, Pokemon Go's PvP system does not smile on Pokemon whose only real utility is debuffing, as a simple switch can clear out all of your hard work, meaning Masquerain has done effectively nothing.

Even when boosted, Masquerain can’t really compete in Ultra League.

Masquerain at its best still isn’t good enough for the big leagues.