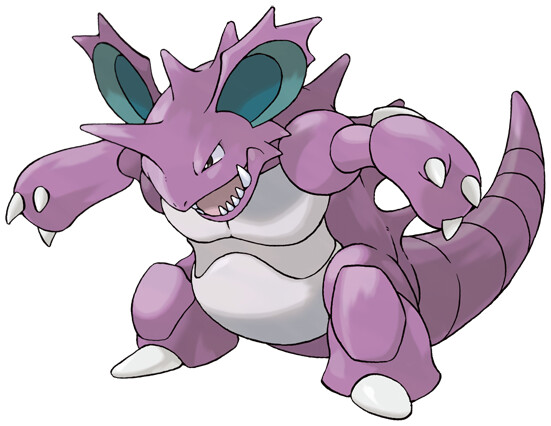 Nidoking is a Poison & Ground Pokémon which evolves from Nidorino. It is vulnerable to Ground, Water, Psychic and Ice moves. Nidoking's strongest moveset is Poison Jab & Earthquake and it has a Max CP of 2,567.

"Nidoking's thick tail packs enormously destructive power. With one swing, it can topple a metal transmission tower. Once this Pokémon goes on a rampage, there is no stopping it."

Access to Fury Cutter lets Nidoking stand out from other Pokemon, most notably Nidoqueen. While its damage output is somewhat laughable, its faster energy gains enable Nidoking to access its Charge Moves sooner. Poison Jab is also viable due to its significantly stronger STAB damage output, but going for this option would make Nidoqueen seem more appealing due to her greater bulk.

Earth Power is the generally preferred ground-type attack due to its faster charge time, though Earthquake offers more raw power and power per energy spent. Megahorn provides solid power and aforementioned counter-coverage against Psychic types, making it the preferred second charged-move. Sand Tomb is recommended for its cheap energy cost, enabling Nidoking to bait shields more easily, as well as applying a guaranteed debuff on the opponent.

Nidoking is basically a less effective Nidoqueen. Its higher attack power betrays it in this setting, leaving its only advantages over its royal counterpart access to Fury Cutter. A combination of Fury Cutter, Earth Power, and Sand Tomb are needed to win against Nidoqueen, and even then it can be inconsistent due to the nature of shield baiting.

Once again, the Queen overshadows the King in this tier. While XL Candy is not needed for Nidoking to reach the CP cap of Ultra League, it does unlock additional IV possibilities in order to optimize Nidoking's bulk.

Nidoking is entirely unviable in the Master League.