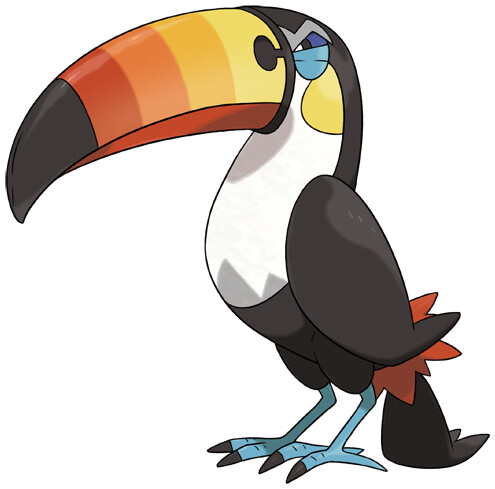 Toucannon is a Normal & Flying Pokémon which evolves from Trumbeak. It is vulnerable to Rock, Electric and Ice moves. Toucannon's strongest moveset is Peck & Drill Peck and it has a Max CP of 2,689.

"Known for forming harmonious couples, this Pokémon is brought to wedding ceremonies as a good luck charm."

None of Toucannon's Fast Moves are considered ideal, but Bullet Seed is generally recommended for its fast energy generation, letting Toucannon spam its Charge Moves sooner. Peck is a subpar move that offers below average gains, with STAB helping to bring up its damage output to average at best.

Drill Peck is Toucannon's main Charge Move, with a low energy cost and respectable STAB damage. Rock Blast offers useful Rock-type coverage and can be used frequently, but its damage output is lackluster. Flash Cannon demands too much energy to be consistently useful, though its coverage against Toucannon's weakness to Rock and Ice Pokemon might catch unsuspecting opponents off guard.

Toucannon's name is an accurate representation of its performance as a glass cannon. Unfortunately it isn't viable in most formats due to its awkward moveset and poor bulk. Pidgeot and Noctowl should be considered if a Normal/Flying Pokemon is needed.

Toucannon doesn't perform consistently well to be viable, with a handful of niche wins and a much longer list of losses against most of the meta.

"Sir we're under attack from scary dragons and dinosaurs!"

"Shut up and return fire!"

"But sir, our cannons have been knocked out..."