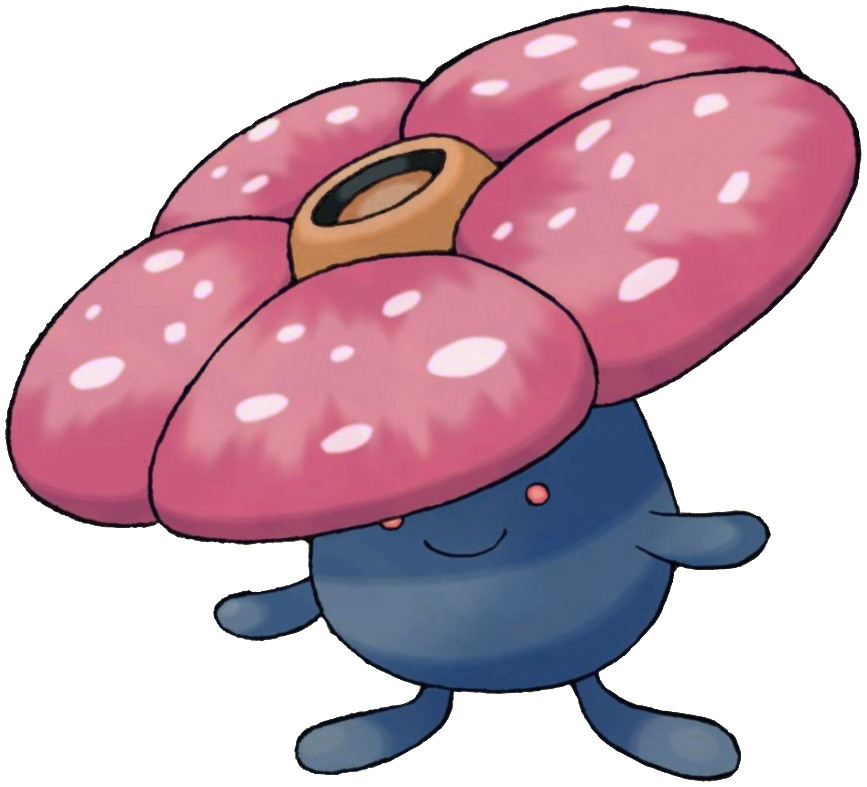 Vileplume is a Grass & Poison Pokémon which evolves from Gloom. It is vulnerable to Flying, Fire, Psychic and Ice moves. Vileplume's strongest moveset is Razor Leaf & Solar Beam and it has a Max CP of 2,559.

"Vileplume's toxic pollen triggers atrocious allergy attacks. That's why it is advisable never to approach any attractive flowers in a jungle, however pretty they may be."

Razor Leaf is preferred for hits high STAB damage output at the cost of having the worst energy gains in PvP. Acid gets STAB and can be useful in some niche situations against Grass or Fairy-types, but has below average energy gains.

Sludge Bomb is the primary and (most of the time) only charge move used by Vileplume due to its lesser energy cost compared to Vileplume's other charge moves. The very poor energy gains from Razor Leaf often risks Vileplume fainting before being able to utilize its more expensive charge moves. Moonblast is preferred for its coverage against common typings.

Vileplume is a good budget Pokemon in Great League PvP, but not really a great one. It has a typing combo that, while common, does allow it several advantages; in particular resisting some of the best moves in the game such as Counter, Power-Up Punch, and Hydro Cannon. Vileplume also has great coverage itself with Moonblast, allowing it to hit big-name Fighting, Dragon, and Dark types very hard.

However, Vileplume's typing is very frequently covered by the secondary moves of Pokemon that it would otherwise counter, with Ice in particular being a very common coverage type. It also doesn't have the best stat-spread for the Great League, leaving it a bit frail at or around the 1500 CP mark.

Overall, Vileplume is a great Pokemon to add to your Great League team early on as Oddish is fairly common in many biomes. On top of this, it shouldn't be too hard to find one close to the 1500 CP mark when evolved. However, as you begin building a stronger Great League team, Vileplume will become more of a niche pick than something to build your team around.

Vileplume has no place in the Master League.