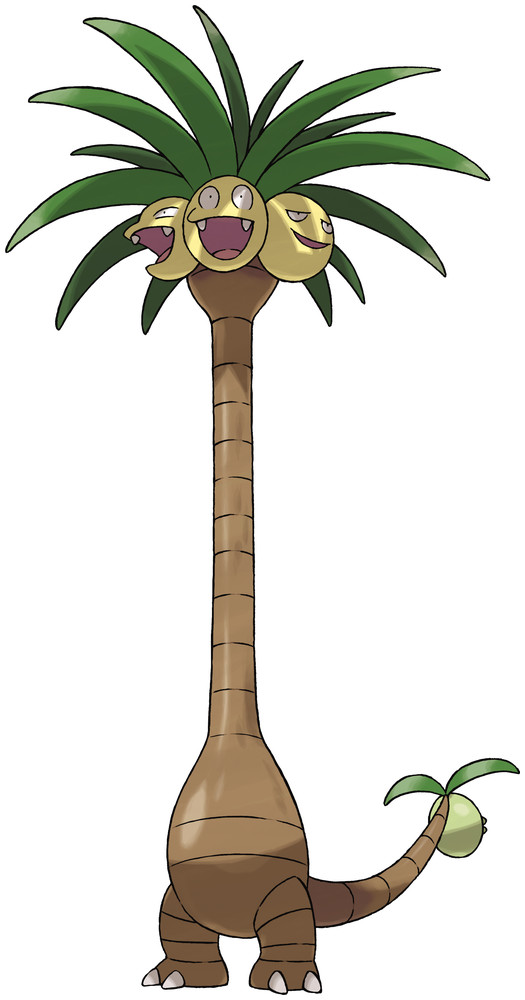 Exeggutor (Alola Form) is a Grass & Dragon Pokémon. It is vulnerable to Ice, Flying, Poison, Bug, Dragon and Fairy moves. Exeggutor's strongest moveset is Dragon Tail & Draco Meteor and it has a Max CP of 3,014.

"Exeggutor originally came from the tropics. Its heads steadily grow larger from exposure to strong sunlight. It is said that when the heads fall off, they group together to form Exeggcute."

Dragon Tail typically performs better than Bullet Seed due to the significant difference in damage output.

Seed Bomb is the main charge move used by Alolan Exeggutor, requiring only 40 energy which allows it to be used frequently and even bait shields.

Dragon Pulse allows our tall dragon tree to deal relatively neutral damage and threaten other Dragon-type Pokemon. Its steep 60 energy cost and average 1.5 DPE (Damage Per Energy) aren't very exciting, but at least it might have a chance to be used compared to the painfully slow Solar Beam.

The addition of Draco Meteor following the Exeggcute Research Day event in April 2022 is a surprising but unimpressive move for Alolan Exeggutor. While it can be considered an improvement over Dragon Pulse due to much higher damage output for only 5 more energy cost, it does not solve Alolan Exeggutor's struggle against its numerous weaknesses.

Alolan Exeggutor is somewhat of a specialist, getting wins against Pokemon that are at an obvious disadvantage, and vice-versa. Being double resistant to three typings (Grass, Electric, Water) allows our long-necked friend to essentially tank those types of attacks without using shields. Poor bulk doesn't help it deal with six vulnerabilities though, including a double weakness to Ice-type attacks which are common on popular picks like Medicham and Azumarill.

Alolan Exeggutor gets to benefit more from its high Attack stat here, but the role it fulfills is similar to Great League, picking on victims weak to its typing, while getting bullied by the rest. The lack of bulk, and losses against almost all of the big names in Ultra League limit our tall tree from growing any further in rank.

Just like the other leagues, Alolan Exeggutor does well in what it specializes in: dealing with Grass, Water, and Electric Pokemon — all of which, however, aren't the most common in the Master League. It does get some wins against certain top picks like Raikou, and even walls Kyogre if it uses at least one shield against a potential Blizzard. Against the rest of the big bois, you're not one of them Greg.