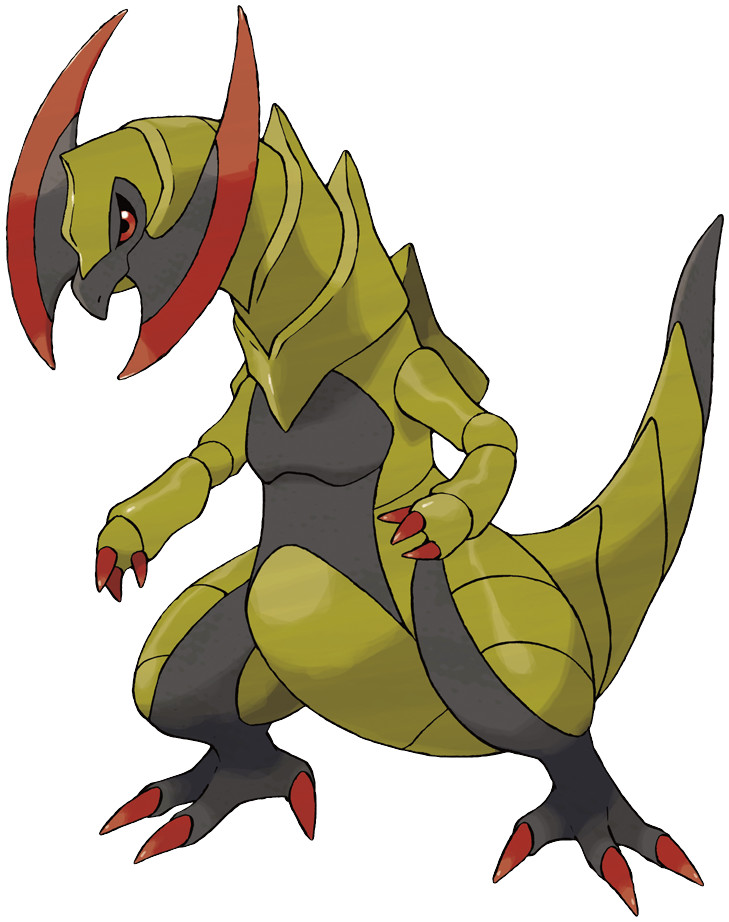 Haxorus is a Dragon Pokémon which evolves from Fraxure. It is vulnerable to Ice, Dragon and Fairy moves. Haxorus's strongest moveset is Dragon Tail & Dragon Claw and it has a Max CP of 3,593.

"Their sturdy tusks will stay sharp even if used to cut steel beams. These Pokémon are covered in hard armor."

Counter is one of the best fast moves in the game, provides wide coverage, but lacks STAB. Dragon Tail deals high STAB damage and offers Dragon-type coverage, but sports only average energy gains.

Dragon Claw ties for the cheapest energy cost, benefits from STAB, and can be used frequently. Night Slash falls behind in raw damage output, and isn't particularly strong, but provides Dark-type coverage and a small chance to proc a major ATK boost. Surf is a respectably efficient charge move that can be used frequently, though it doesn't always synergize well with Haxorus. Earthquake costs the most amount of energy by a large margin, and isn't recommended for this reason, though its valuable coverage and high damage threat are still appealing.

Haxorus is a Dragon-type with a very high ATK stat, which results in poor bulk in this league. While its moveset is fast and can easily pressure shields, the extreme fragility is often enough for Haxorus to faint before claiming any wins. It should also be noted that with the exception of Earthquake, the ubiquitous Azumarill resists every move that Haxorus can learn.

The significant issue with vulnerable bulk is still a major problem in Ultra League, resulting in Haxorus losing to most meta picks. Steel-types will have a hard time vs Counter, while Dragon Tail performs even worse overall, and is insufficient even against other Dragon-types.

Master League is the only way Haxorus can make use of its high offensive stat to shine, with consistent damage output from both fast and charge moves, while also pressuring shields quite easily. A max CP of 3593 is quite respectable, though the lack of defensive stats holds Haxorus back, making it difficult to win against bulkier opponents. Night Slash and Surf are also unimpressive charge moves in terms of solid damage output since they lack STAB, and overall Haxorus may struggle significantly against Fairy-types.