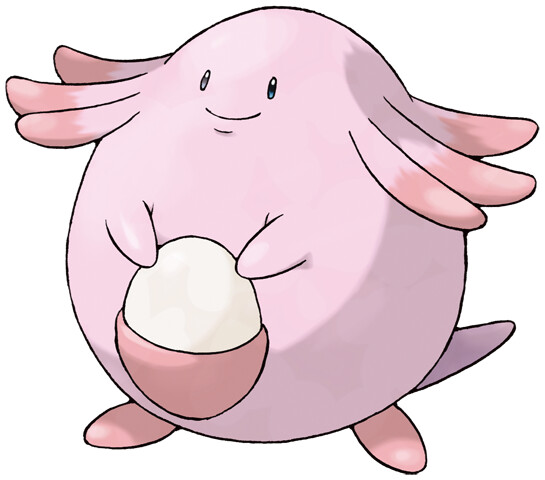 Chansey is a Normal Pokémon which evolves from Happiny. It is vulnerable to Fighting moves. Chansey's strongest moveset is Pound & Hyper Beam and it has a Max CP of 1,255. Chansey evolves into Blissey.

"Chansey lays nutritionally excellent eggs on an everyday basis. The eggs are so delicious, they are easily and eagerly devoured by even those people who have lost their appetite."

Pound and Zen Headbutt are two of the worst PvP fast moves in the entire game. Unexciting damage output combined with dreadful energy gains means you're gonna have to pick your poison. Pound gets STAB at least.

Dazzling Gleam performs better than Psychic for the same high 70 energy cost but offers slightly better coverage. Hyper Beam is known for being one of the slowest and hardest-hitting moves in the game, which also gets STAB with Chansey.

While Psybeam is legacy, it is also one of the worst charge moves in the game, costing 60 energy and only returning an appalling 1.17 DPE (Damage Per Energy).

When PvP was announced Chansey was immediately thought to be one of the best candidates for lower tier PvP thanks to its incredible bulk and coverage moves against its only weakness. Thankfully Niantic nerfed this pink demon to the ground by giving its moveset terrible PvP stats, limiting its viability to just gym defense.

Chansey has a maximum CP of 1255, which doesn't even reach the cap for Great League, let alone Ultra League.

Chansey has literally a 100% loss rate in Master League according to PvPoke. Unless you're facing a Weedle or something, but go do that in Great League.