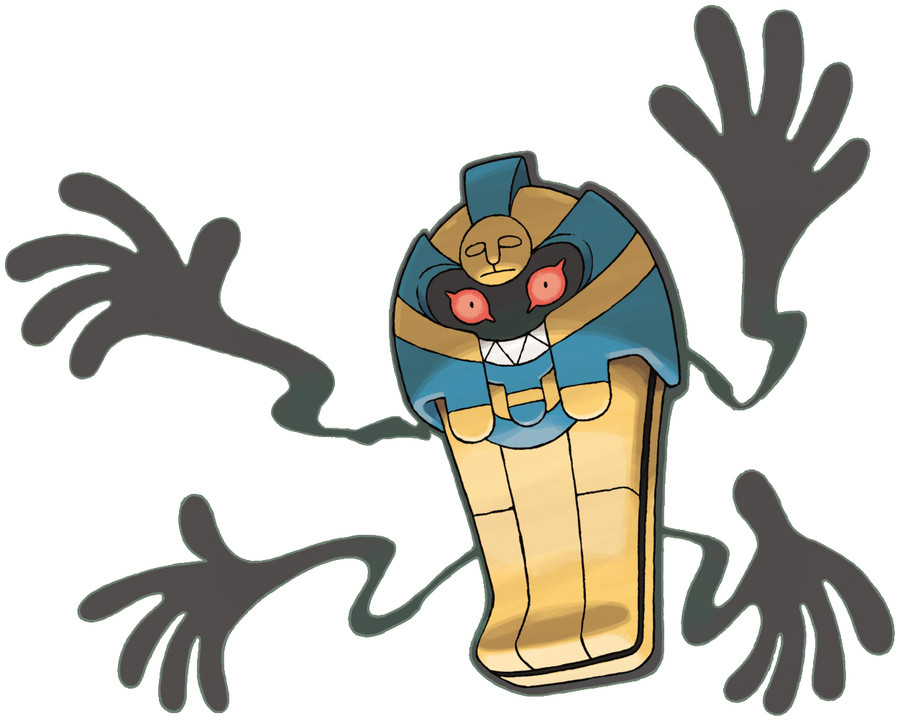 Cofagrigus is a Ghost Pokémon which evolves from Yamask. It is vulnerable to Ghost and Dark moves. Cofagrigus's strongest moveset is Shadow Claw & Shadow Ball and it has a Max CP of 2,273.

"Grave robbers who mistake them for real coffins and get too close end up trapped inside their bodies."

Shadow Ball (100 Power/55 Energy) is great on just about any Pokemon, especially with STAB. Dark Pulse could be chosen for its slightly faster accessibility since it costs 5 less energy, considering Cofagrigus has no cheap bait moves to pressure shields with. Psychic doesn't provide good value for Cofagrigus when factoring in its moderate energy cost.

The addition of Shadow Claw following the GBL Season 9 update is what enables Cofagrigus to be viable in the meta, at least to a certain degree. Being a mono-Ghost Pokemon that's slightly less bulky than Dusclops but still better than average, Cofagrigus can perform in its role in certain situations. Existing meta Pokemon such as Sableye are more favored due to their faster movesets and typing advantage, but that doesn't mean Cofagrigus is completely useless. Look out for limited formats where top meta picks are limited or banned, giving Cofagrigus a more ideal scenario to shine.

Coagrigus needs XL Candy to reach the CP cap of Ultra League, making this Pokemon quite expensive to prep. Its coverage is quite impressive, but still has to be mindful of common Dark-types. Due to the lack of a cheap Charge Move, Cofagrigus will more often than not lose to every other Ghost-type, especially when shields are in play. However it should be noted that Cofagrigus does have a niche against Giratina in very specific circumstances.

It's everything food; pure and simple.