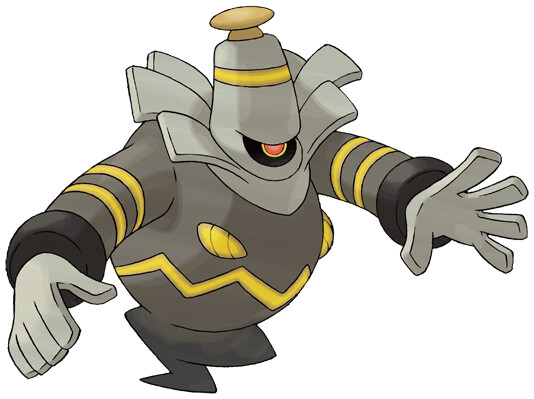 Dusknoir is a Ghost Pokémon which evolves from Dusclops. It is vulnerable to Ghost and Dark moves. Dusknoir's strongest moveset is Hex & Shadow Ball and it has a Max CP of 2,388.

"The antenna on its head captures radio waves from the world of spirits that command it to take people there."

Hex has 2 DPT (Damage Per Turn) and 3.66 EPT (Energy Per Turn). It charges fairly well, but it's just not very good overall.

Ominous Wind (50 Power/40 Energy) is not a strong move, but it does have a small chance of granting a stat-boost on use, and its cheaper energy cost is more appealing for baiting shields. Psychic (90 Power/55 Energy), meanwhile, is a good move that can allow Dusknoir to threaten Fighting Types in particular. However, it doesn't do much against Dusknoir's counters. Shadow Ball is the strongest Charge Move available following the Duskull Community Day event, gets STAB, and is overall a solid move.  Dark Pulse has a coverage profile that is so close to Ghost that it may as well be a mono-Ghost set, however without STAB its damage output is less appealing and overall not viable.

The addition of Shadow Ball following the Duskull Community Day event gives Dusknoir much needed offensive power to flip several matchups. Dusknoir's bulk is largely due to its high DEF stat, which means its unimpressive STA stat ultimately results in average bulk overall. As a mono-Ghost Pokemon, Dusknoir enjoys mostly neutral matchups that largely do not resist Dusknoir's moves, making it a decent choice overall. However with the lack of any meaningful coverage against Dark Pokemon in particular, Dusknoir is walled quite easily. Psychic could be chosen to deal unresisted damage to Normal-types, but this option gives up either the power of Shadow Ball or the speed and shield bait pressure from Ominous Wind.

Dusknoir requires XL candy to reach the CP cap of Ultra League, and is overall a decent option at best. Access to Shadow Ball following the Duskull Community Day event improves Dusknoir's viability against the meta, and gives Dusknoir a chance at the 1-shield matchup vs Giratina. However with Hex as the fast move option, Ghost-types with Shadow Claw tend to be better options overall. The lack of coverage also holds Dusknoir back significantly considering how common Dark-types are in this league.