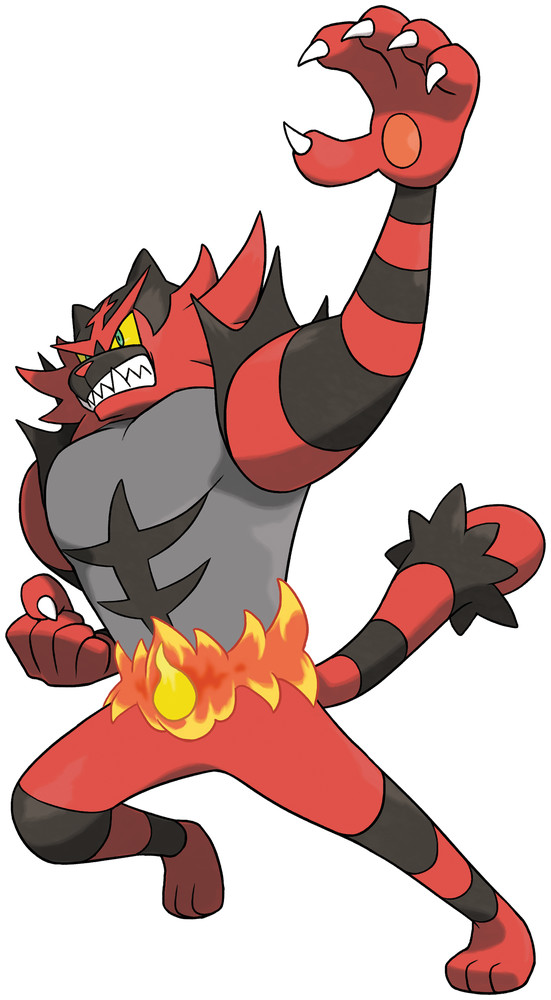 Incineroar is a Fire & Dark Pokémon which evolves from Torracat. It is vulnerable to Fighting, Ground, Rock and Water moves. Incineroar's strongest moveset is Fire Fang & Fire Blast and it has a Max CP of 2,996.

"When its fighting spirit is set alight, the flames around its waist become especially intense."

The former is required if Fire Blast is to be chosen due to the massive energy requirements to access, allowing for potential OHKO plays. The latter synergizes better with Flame Charge due to the ATK buff, though this isn't a particularly strong Charge Move for its energy cost. Regardless of which Fast Move is chosen, Dark Pulse is always recommended due to its lesser energy cost and respectable STAB Dark-type coverage.

Incineroar is almost identical to Houndoom, with the same Dark/Fire typing, offensively-orientated stats, and similar movesets. To be fair, Incineroar is at least somewhat bulkier and has access to some utility with Flame Charge. Unfortunately its performance against the meta isn't very spectacular.

Incineroar can perform in both open and limited formats due to its favorable typing against Giratina and common Steel-types, among other Pokemon. However, it might not be as consistent as other meta picks.

To avoid the much stronger legendary and mythical Pokemon, Incineroar would probably prefer to play in restricted formats like Premier Classic. Unfortunately the lack of Grass, Bug, Psychic, and Ghost Pokemon in this league does Incineroar no favors, and thus few reasonable wins can be expected aside from Ice and Steel opponents.