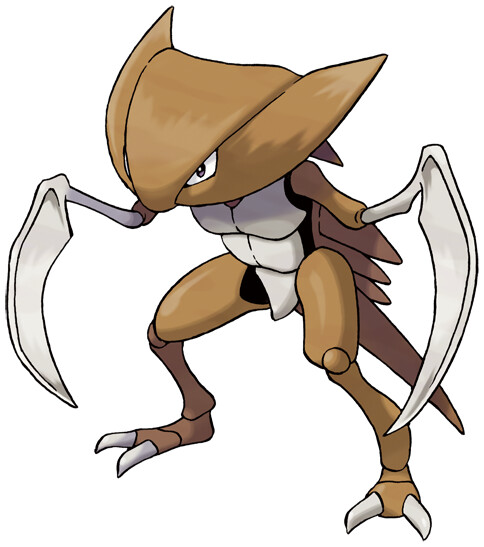 Kabutops is a Rock & Water Pokémon which evolves from Kabuto. It is vulnerable to Grass, Fighting, Ground and Electric moves. Kabutops's strongest moveset is Waterfall & Stone Edge and it has a Max CP of 2,713.

"Kabutops swam underwater to hunt for its prey in ancient times. The Pokémon was apparently evolving from being a water dweller to living on land as evident from the beginnings of change in its gills and legs."

Mud Shot and Fury Cutter* are very similar in performance, focusing on high energy generation to use charge moves sooner, at the cost of poor damage output. The former is generally recommended for its superior energy gains, and also due to the latter requiring an Elite TM to access. Waterfall is the direct opposite; opting for strong STAB damage output while providing below average energy generation. Rock Smash is a bad move and doesn't suit Kabutops.

Ancient Power requires the least amount of energy, and is recommended primarily for this reason. While it's not particularly strong, Kabutops needs a charge move with low energy cost in order to not fall behind faster opponents. Stone Edge is strong with STAB, and costs a moderate amount of energy. Water Pulse is a poor move, but is the only coverage option available.

Kabutops is a Water/Rock Pokemon, which suggests it would be favorable against Fire and Ice Pokemon, but unfortunately both of those typings are quite rare in the meta due to the large frequency of Water-types (and also due their vulnerabilities and struggles against the meta). Thus, Kabutops is somewhat left awkwardly on the sidelines with no real purpose in the meta. If Kabutops is to be chosen for its Rock-type coverage as a counter to Flying-types, both Mud Shot and Fury Cutter would be resisted in those matchups. Kabutops also can't really tank damage well due to its poor bulk, which results in losses against Flying-types like Altaria and Mandibuzz, who Kabutops as a Rock-type would be expected to beat. Overall it's probably better to pass on this Pokemon until a moveset update improves its performance considerably.

Kabutops doesn't have much of a role in Ultra League or Premier Cup. Its issues with its bulk and inefficient movesets continue to hold it back.