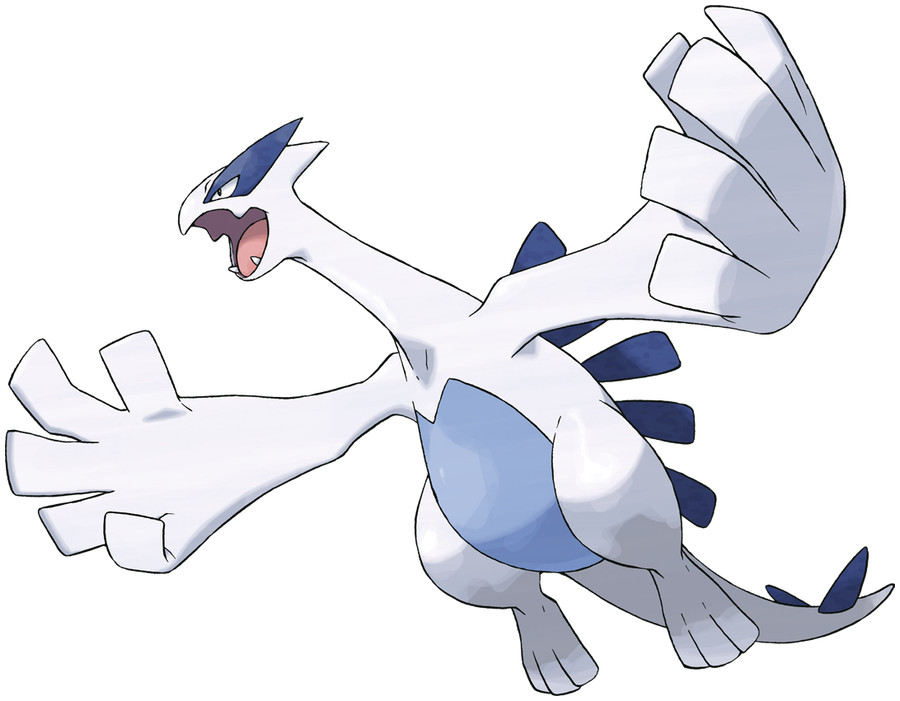 Lugia is a legendary Psychic & Flying Pokémon. It is vulnerable to Rock, Ghost, Electric, Ice and Dark moves. Lugia's strongest moveset is Extrasensory & Aeroblast and it has a Max CP of 3,703.

"Lugia's wings pack devastating power—a light fluttering of its wings can blow apart regular houses. As a result, this Pokémon chooses to live out of sight deep under the sea."

With the Season 8 buff to Dragon Tail, its incredible damage output now makes it the superior option to Extrasensory despite having slightly less energy gain. Dragon Tail is especially preferred in Master League due to the ubiquitous use of Dragon-type Pokemon.

Sky Attack is a very efficient move, benefits from STAB, and costs the least amount of energy. Future Sight requires a steep 65 energy cost, and is generally not preferable due to this cost unless Psychic-type coverage is highly needed. Hydro Pump (130 Power/75 Energy) takes longer to charge, has lower base damage per energy, and lacks STAB, but it does allow Lugia to perform better against a number of potential threats, such as Steel- and Rock-types. The addition of Aeroblast from the Nov 2020 Animation Week event is a debatable but nonetheless welcome addition to Lugia's kit, demanding an expensive 75 energy cost but in return offering a massive 170 base power (2.267 DPE). With STAB, Aeroblast when resisted performs almost identically to Hydro Pump, which makes Lugia's signature move more preferable due to its minor chance to proc its +2 ATK buff, despite not offering additional coverage.

Aeroblast++, the signature move of Apex Purified Lugia, is functionally identical to Aeroblast in PvP.

Thanks to its availability as a long-term research breakthrough reward, Lugia's CP can be low enough to enter into the Great League after a reroll of its IVs from a trade, and it definitely performs well here. Lugia can wall attack after attack while giving back decent punishment, and makes a fantastic team choice to cover a fighting weakness in particular. Notably, it absolutely dominates Medicham. It has the same flying-type weaknesses as other common Pokémon like Skarmory and Altaria.

Lugia's sheer defensive utility begins to shine through in the Ultra League, where it goes from a solid mon in a competitive Flying-type niche to a major threat. It holds its own against much of the tier, but its fatal drawback is its weakness to the masters of the tier: Giratina's two formes and Registeel. Regardless, with a bit of forethought, Lugia can perform very well in the Ultra League and support its team fantastically.

Without the CP cap holding it down, Lugia gets to make use of its full power in the Master League. Possessing the game's highest bulk AND stat product, on top of a powerful moveset, Lugia is an absolute force to be reckoned with. Its typing and moves allow it to counter big threats such as Groudon, Palkia, Garchomp, and Focus Blast Mewtwo. Lugia's fantastic bulk also allows it to cushion blows from the numerous nukes in the metagame, making it an excellent Pokemon to catch charge moves with. The sheer power of Aeroblast can tear off a tremendous chunk of health even when resisted, making Pokemon like Dialga and Metagross seriously consider shielding it, while Lugia's bulk allows it to consistently satisfy the move's immense energy demands. Lugia is an excellent safe switch and, despite its many weaknesses, it pretty much only hard loses to Melmetal.