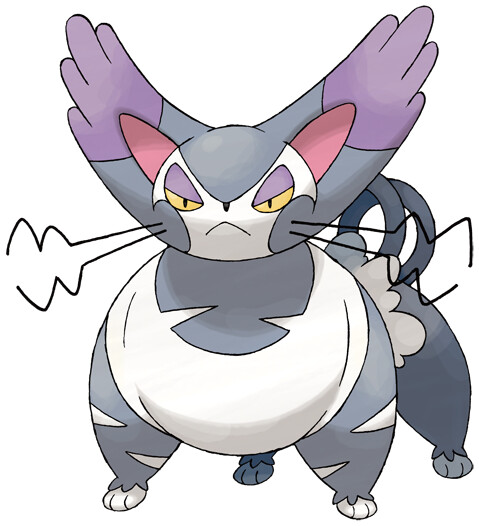 Purugly is a Normal Pokémon which evolves from Glameow. It is vulnerable to Fighting moves. Purugly's strongest moveset is Scratch & Play Rough and it has a Max CP of 1,953.

"To make itself appear intimidatingly beefy, it tightly cinches its waist with its twin tails."

Shadow Claw may lack STAB, but still has average damage output that's largely resisted, and provides double the energy gains of Scratch. The latter deals high neutral damage with STAB, but can't be Super Effective against any Pokemon, and provides poor energy gains.

Aerial Ace is a poor move, but is recommended for its lesser energy cost, in addition to coverage against Purugly's weakness to Fighting-type Pokemon. Play Rough and Thunder both demand the same moderately high energy cost, so pick either for the coverage that's more preferable.

As a Normal-type, Purugly's niche largely revolves around its ability to defeat most Ghost-type Pokemon, thanks to its double resistance to Ghost-type attacks as well as access to Shadow Claw. While its bulk isn't terrible, Purugly's main drawback is due to its cumbersome charge moves, which are quite slow and costly to use. For its role, Pokemon like Snorlax or Lickilicky generally have superior performances against the overall meta.

Purugly lacks stats for Ultra League; at level 50 its CP won't even reach the CP cap of this league. While it can still wall Ghost-types like Gengar, Drifblim, or even Giratina Origin Forme, the Altered Forme boasts too much bulk and moveset efficiency for this cat to handle.

Dragons and dinosaurs look very scary in this league. Better to take a cat nap instead.