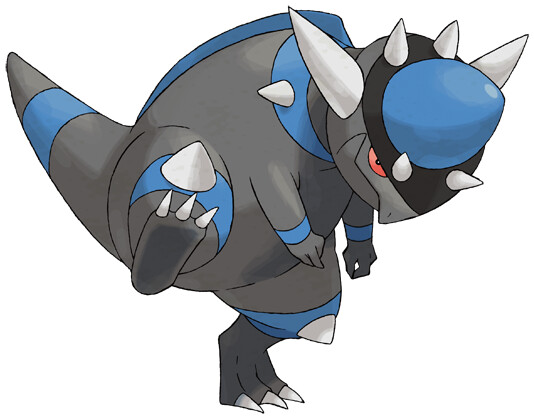 Rampardos is a Rock Pokémon which evolves from Cranidos. It is vulnerable to Fighting, Ground, Steel, Water and Grass moves. Rampardos's strongest moveset is Smack Down & Rock Slide and it has a Max CP of 3,298.

"This ancient Pokémon used headbutts skillfully. Its brain was really small, so some theories suggest that its stupidity led to its extinction."

Smack Down sits at 4 DPT (Damage Per Turn) and 2.66 EPT (Energy Per Turn). Coming off of Rampardos' sky-high attack stat and STAB, this can cause some real pain. However, it's slow to charge. Fortunately, Rock Slide (80 Power/45 Energy) charges reasonably fast. It pairs fairly well with Flamethrower (90 Power/55 Energy) for coverage. In general, you'll want to use this set as a suicide lead or to switch into something that Rampardos can definitely take. As a lead, it has the advantage of dealing very high damage with quick moves while having such huge damage from charged moves that most players who are familiar with Rampardos will definitely want to pull up their shields, paving the road for a team member to wreak havoc. However, in practice, Rampardos' frail nature means it will likely only get off one or possibly two charged attacks before falling. One special note; Outrage (110 Power/60 Energy) is a good attack on paper, but it doesn't net Rampardos too many notable counters and takes longer than Rampardos' other attacks to charge, meaning you'll probably only get it off once without heavy shield investment.

While a monster in PVE, Rampardos doesn't have the build to survive very well in PVP generally speaking. Its heavy slant towards offense and the huge CP gains that this comparatively brings makes Rampardos terribly glassy in the great league. On top of this, a number of top Pokemon in the tier such as Lucario, Medicham, and Bastiodon see it as a trivial non-threat. It does have good machups, but overall superior Pokemon can fill the same niches and still have utility to spare.

The same basic story plays out in the Ultra League. Look elsewhere for rock-type coverage

Rampardos fares a little better in the Master league, where its full potential as an attacking juggernaut can shine. Unfortunately, it's still not "good". It has good matchups against Pokemon such as Dragonite, Charizard, and Lugia, but it's still overshadowed by Pokemon who can fill this role and see other use as well. The one advantage to Rampardos is the fact that most players will be afraid to not shield its heavy-hitting charged moves outside of resistance. However, it's also taken down remarkably easily by many, many top-tier threats, making it extremely risky to use.