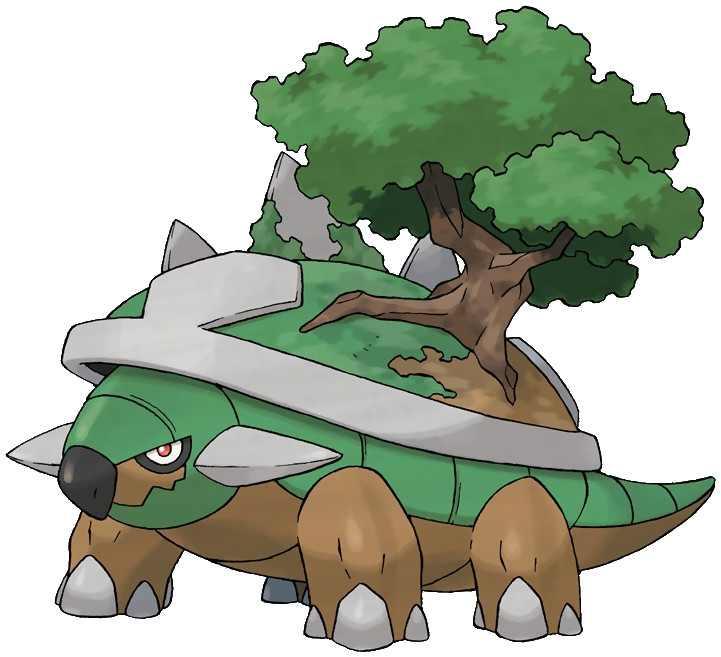 Torterra is a Grass & Ground Pokémon which evolves from Grotle. It is vulnerable to Ice, Flying, Bug and Fire moves. Torterra's strongest moveset is Razor Leaf & Frenzy Plant and it has a Max CP of 2,934.

"Small Pokémon occasionally gather on its unmoving back to begin building their nests."

Razor Leaf takes advantage of STAB to deal massive damage, at the cost of the offering the worst energy generation in the game. Bite is generally an inferior move due to a lack of STAB and also worse damage output stat-wise, but an off-typing can catch opponents by surprise in certain formats.

Frenzy Plant is very powerful and hits even harder with STAB, but is somewhat redundant due to the high damage output of Razor Leaf. Sand Tomb is recommended to for its low energy cost and debuff utility. Stone Edge is good for coverage against all of Torterra's weaknesses, though poor energy gains makes it difficult to use. Earthquake benefits from STAB and provides wide coverage against numerous typings, but 65 energy is a lot to ask for from Torterra. The revamp of Return during the Dec 11, 2019 rebalance makes it cost too much energy to be reliably accessible.

Torterra is a niche pick for Great League, with decently well-rounded stats, a somewhat risky typing, and a very slow moveset. The numerous Grass-type contenders in this league all compete with each other for a slot on the roster, though Torterra stands out due to its niche typing which offers 3x resistance vs Electric-type damage. Losses against fellow Grass-types who use Frenzy Plant, in addition to Tropius, makes it hard to pick Torterra over them in the general meta. The addition of Sand Tomb following the Dec 11, 2019 rebalance enables Torterra to apply a debuff on the opponent before fainting, which gives it some utility compared to other Razor Leafers.

Torterra serves little use in Ultra League other than hard-countering Swampert, while also beating Melmetal. As mainly a Grass-type, Torterra has a difficult time dealing with the Giratina-centered meta. Perhaps its best use is either bench pressure to deter Swampert, or actually being used to delete Swampert.

Torterra lacks sufficient stats to perform well in Master League. As a Grass-type, its use is mostly as an anti-meta solution to common picks like Tyranitar, Groudon, and Kyogre. Overall not too spectacular, and probably one you can live without.