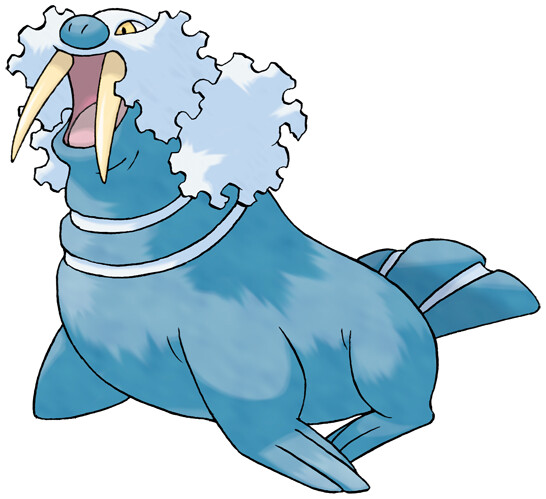 Walrein is an Ice & Water Pokémon which evolves from Sealeo. It is vulnerable to Fighting, Rock, Grass and Electric moves. Walrein's strongest moveset is Waterfall & Blizzard and it has a Max CP of 2,726.

Powder Snow is preferred due to its high energy generation, but Waterfall can be chosen for more reliable Water-type damage. Frost Breath is outclassed.

The Community Day exclusive move Icicle Spear is a must have when using Walrein due to its very low cost and strong damage output. Earthquake is the highly preferred second charge move, as Ice + Ground is a largely unresisted type combination. Water Pulse is underwhelming. Blizzard is outclassed by Icicle Spear.

The January 2022 Community Day blessed Walrein with two excellent moves that catapulted its status from being a complete nobody to being one of the most threatening Pokemon in the metagame. Overall positive matchups against metagame staples such as Azumarill, Nidoqueen, Altaria, and most Grass-types provide it with plenty of play. Despite having four weaknesses to fairly common attacking types, Walrein's bulk and coverage are strong enough to cover most of them. Most Electric- and Rock-type Pokemon fear Earthquake, while Grass-types are often defeated by its relentless barrage of Icicle Spears and Powder Snows. Counter users such as Medicham, Scrafty, and Defense Deoxys are some of the most reliable ways to take down this juggernaut.

Walrein isn't a flawless specimen, however. It only has two resistances, which limits its ability to outright wall certain matchups when at a shield disadvantage. It also has a tougher time covering its teammates' weaknesses compared to the likes of Azumarill, Galarian Stunfisk, or Skarmory. Although Powder Snow + Icicle Spear offer a great deal of base consistency, it may find itself being somewhat bait dependent to land an Earthquake on certain targets such as Galarian Stunfisk and Bastiodon.

Walrein's reign of terror continues in the Ultra League, and it gains a new snack in Giratina. The additional bulk in this league allows Walrein to survive a Focus Blast from Registeel and potentially outduel it. Other than those, Walrein's incredible moves and stats simply means it is an ever-present threat.

It takes the uncapped CP of Master League to finally slow down Walrein's rampage, as it finds itself having low stats and lacking in resistances to take on a defensive niche. However, Walrein is not to be written out entirely, as its moveset is still terrifying and has an even greater percentage of super effective targets thanks to Master League's centralization around Dragon-, Flying-, and Steel-type Pokemon. Potential wins against Giratina, Dialga, Togekiss, and even Kyogre is nothing to sneeze at, as no other Pokemon in the game can boast this kind of matchup combination. With that said, it is considerably more fragile and lacking in power compared to its performance in Great and Ultra League. The aforementioned wins are quite unreliable as well. Walrein shines better in a format with a more restricted ruleset, such as the Premier Cup, where its low stats is less of an issue.