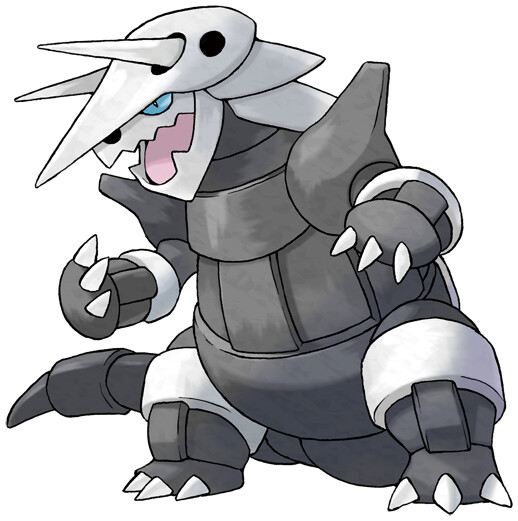 Aggron is a Steel & Rock Pokémon which evolves from Lairon. It is vulnerable to Fighting, Ground and Water moves. Aggron's strongest moveset is Iron Tail & Heavy Slam and it has a Max CP of 3,000.

"Aggron claims an entire mountain as its own territory. It mercilessly beats up anything that violates its environment. This Pokémon vigilantly patrols its territory at all times."

Smack Down or Dragon Tail + Stone Edge and Thunder

Smack Down is preferred for its high damage output backed by STAB, in addition to good coverage against common typings. Dragon Tail generally performs worse partly due to lack of STAB, though there may be niche cases where you'd want the Dragon-type damage and extra energy generation.

Stone Edge is powerful and takes advantage of STAB, while Thunder provides alternative coverage. Both cost a lot of energy to use, unfortunately. Heavy Slam could be chosen for its cheaper STAB Steel-type coverage, but this is a less valuable typing. The addition of Rock Tomb following the GBL Season 10 update is unimpressive, as its poor damage output and high energy cost discourages its use despite its new debuff utility.

Aggron...isn't great. With plenty of other strong anti-flying options (Bastiodon and Galarian Stunfisk being the two most prevalent ones), it's just not worth bringing Aggron out most of the time.

Aggron's still not great in Ultra League, though it's arguably a little better? Your options for strong anti-flyings are a little more limited here, which lets Aggron shine very slightly more.

It's Aggron, what more needs to be said? With Dialga, Kyogre, Groudon, and Melmetal running around constantly, and limited need to Smack Down anything, Aggron's utility is incredibly limited. You could use Aggron, but should you? (No. You probably shouldn't.)