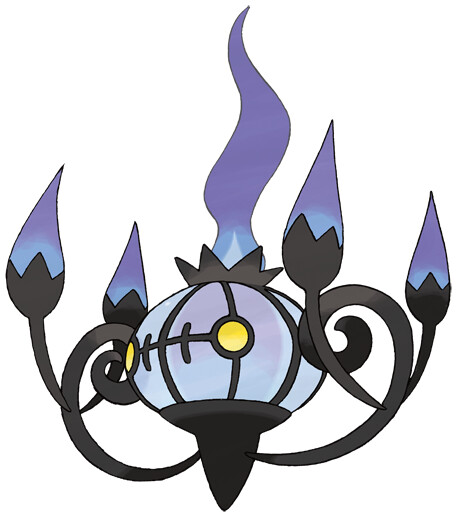 Chandelure is a Ghost & Fire Pokémon which evolves from Lampent. It is vulnerable to Ground, Rock, Ghost, Water and Dark moves. Chandelure's strongest moveset is Fire Spin & Shadow Ball and it has a Max CP of 3,268.

"The spirits burned up in its ominous flame lose their way and wander this world forever."

Incinerate boasts the best stats in terms of overall damage output and energy generation, but has a painfully slow animation that lasts 5 turns. Fire Spin is inferior stat-wise, notably in energy gains. Hex falls behind in damage output, but has its niche as a Ghost-type move that's largely unresisted.

Shadow Ball benefits from STAB to threaten potentially massive damage, but costs quite a bit of energy. Flame Charge is the cheapest charge move available energy-wise, though not by much, but guarantees a +1 ATK buff that can increase pressure on the opponent. Energy Ball lacks STAB, but can be chosen for its coverage against many of Chandelure's weaknesses. Overheat is the most powerful option available, but is risky to use due to its self-debuff.

Chandelure shares the same typing as the popular Alolan Marowak, and thusly competes for its role. Unfortunately Chandelure lacks cheap charge move options to bait shields or apply faster pressure, and high offensive stats results in poor bulk. It's still a strong option when given a favorable matchup with typing advantages, but likewise the opposite can be argued for when things don't go well.

Chandelure has its niche in Ultra League as a Ghost/Fire Pokemon since Alolan Marowak lacks stats, but still strugges against certain meta picks due to its cumbersome moveset and vulnerable bulk. For example, Chandelure's powerful moves and typing should be favorable against Magnezone, but the latter's faster moveset can take advantage of Chandelure's squishy bulk unless both shields are used.

A max CP of 3268 isn't particularly impressive when considering the various legendaries and pseudo-legendaries that exist in this league, but Chandelure does stand out with its typing and coverage. Water-types, Dragon-types, and Snorlax are the main threats, while other matchups can be played out depending on shield usage.