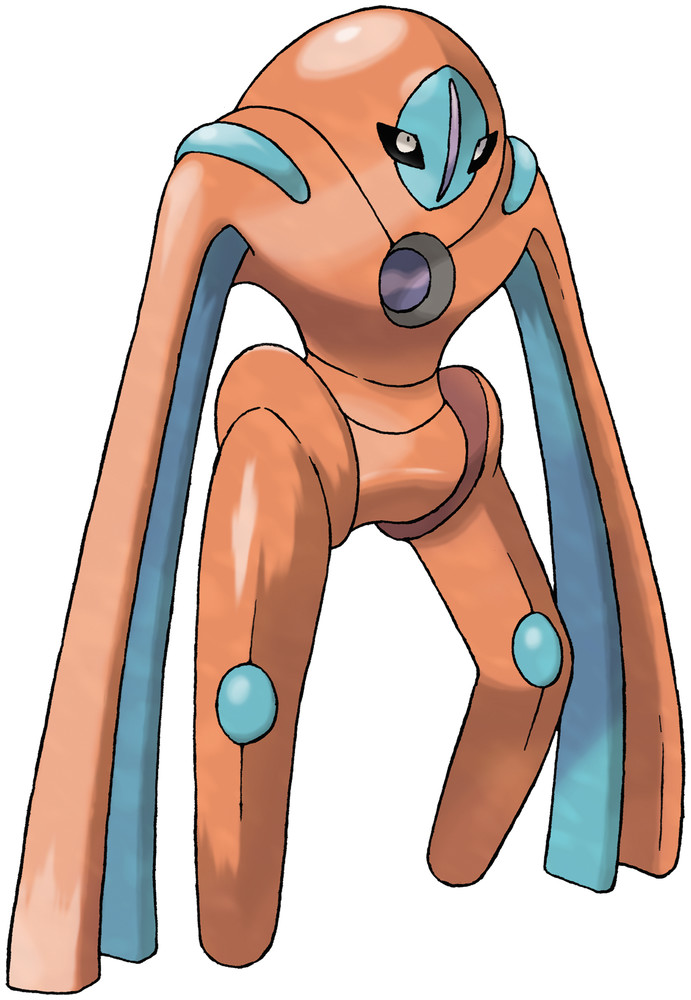 Deoxys (Defense) is a mythical Psychic Pokémon. It is vulnerable to Bug, Ghost and Dark moves. Deoxys's strongest moveset is Counter & Thunderbolt and it has a Max CP of 2,274.

"The DNA of a space virus underwent a sudden mutation upon exposure to a laser beam and resulted in Deoxys. The crystalline organ on this Pokémon's chest appears to be its brain."

Counter + any 2 of Psycho Boost, Thunderbolt, or Rock Slide

Psycho Boost is the most commonly seen charge move on Deoxys due to having STAB, low cost, and high DPE. It is Deoxys's best option against Ground-type Pokemon such as Swampert, Galarian Stunfisk, and Nidoqueen. However, it comes with a harsh self-debuff and requires some finesse. Thunderbolt can be chosen for its Electric-type coverage, hitting Water- and Steel-type Pokemon as well as Scrafty. Rock Slide is Deoxys's cheapest non-debuffing move, and can be used to cover targets such as Talonflame, Altaria, or Alolan Marowak.

Deoxys Defense Forme is one of the best Pokemon in Great League, boasting amazing bulk and a diverse moveset that threatens up to 10 different typings for Super Effective damage. It functions similarly to Medicham, although it trades a Fighting STAB for fewer weaknesses and greater coverage. Deoxys is most commonly seen as a lead as it can anchor for Fighting weak backlines and more easily switch out to clear Psycho Boost's self-debuff. However, its great coverage and few weaknesses can allow it to function as a safe swap as well.

Deoxys's dominance is kept in check by its relatively minimal resistances and large problems against Ghost-type Pokemon such as Sableye, Trevenant, and Cofagrigus. Its charge moves are also incapable of doing much damage to Galarian Stunfisk.

The Lv50 update greatly improves the performance of Deoxys Defense Forme in Ultra League, transitioning all of the perks it enjoyed in Great League to Ultra League. The steep XL costs might be worth it for competitive players due to the additional options that only Deoxys Defense Forme provides in this league. Medicham cannot reach the CP cap of this league, and no other meta Psychic-type has access to the powerful Fast Move Counter, in addition to the relatively unique coverage that Deoxys provides. Gallade, Mew, Hypno, and Armored Mewtwo have Fighting-type coverage, but only in their Charged Moves, while actual Fighting-types don't provide resistances to both other Fighting-types and Psychic-types that Deoxys boasts. Overall a very strong contender now that XL is a possibility, though popular picks like Giratina and Cresselia help keep it in check.

Deoxys Defense Forme doesn't do as well in Master League.