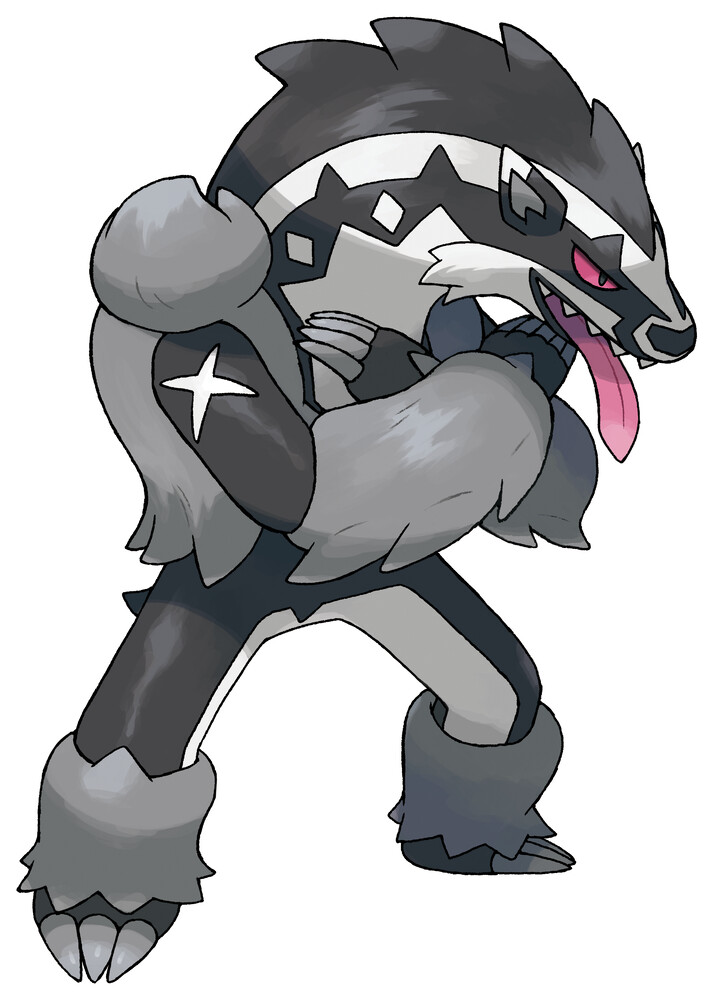 Obstagoon is a Dark & Normal Pokémon which evolves from Linoone. It is vulnerable to Fighting, Bug and Fairy moves. Obstagoon's strongest moveset is Lick & Hyper Beam and it has a Max CP of 2,652.

"Its voice is staggering in volume. Obstagoon has a tendency to take on a threatening posture and shout—this move is known as Obstruct."

Counter is one of the best fast moves in the game, and is superior to Lick in terms of damage output, energy generation, and coverage.

Night Slash takes advantage of STAB to provide consistent damage, and has a small chance to boost Obstagoon's ATK. Cross Chop is sometimes underwhelming, but Obstagoon may need it to nail certain Fighting weak targets. Gunk Shot costs large amounts of energy, but is the only option available to threaten Obstagoon's weakness to Fairy-types. Hyper Beam demands enormous energy to use, but in return threatens significant neutral damage with STAB.

Obstruct is a move limited to Community Day events and Elite TMs. It offers appealing utility on paper, buffing Obstagoon's DEF and reducing the opponent's DEF by 1 stage. However its damage output is pathetic, and with an energy cost of 40 and not the cheaper 35 tier, its performance is unfortunately not as impressive as we hoped. For more consistency and meaningful shield threat, it is recommended to use Night Slash paired with another secondary tech option, as Obstruct alone may not be adequate to deal sufficient Dark-type damage for Obstagoon's role, depending on the matchup. Obstruct's stat modifications can be very significant in drawn out matches, however.

In the context of open Great League, Obstagoon is the textbook definition of an anti-meta Pokemon. It sports a rather unique combination of positive matchups that enables it to break cores. Most notably, cores revolving around Ghost types, Steel types, and Walrein can find themselves struggling against Obstagoon. On the other hand, it has extremely exploitable weaknesses due to its double weakness to Fighting and its lack of reliable answer to Fairy-type Pokemon.

Obstagoon is often compared to Scrafty, due to both Pokemon's Fighting- and Dark- coverage. Scrafty may sometimes be seen as the superior option due to its STAB Counter. Obstagoon's claim to fame, however, is its near-immunity to Ghost thanks to its Normal typing, granting it more decisive wins against Ghost-type Pokemon such as Trevenant and Cofagrigus.

Obstagoon reprises its role as a corebreaker in the Ultra League, preying once again on Ghost- and Steel-type Pokemon, as well as the omnipresent Walrein. The increased bulk in Ultra League gives Obstagoon more opportunities to boost with Obstruct or Night Slash, which can quickly snowball out of control. It has a tougher time breaking down Registeel than in Great League, however. Dragon Breath Giratina is also an unpleasant matchup. Like with Great League, it competes with Scrafty for this corebreaking role.

With a max CP of 2999, Obstagoon lacks sufficient stats for Master League. It does have somewhat positive matchups vs Dialga, Giratina-O, Excadrill, and Mewtwo, which turns it into a gimmicky corebreaker