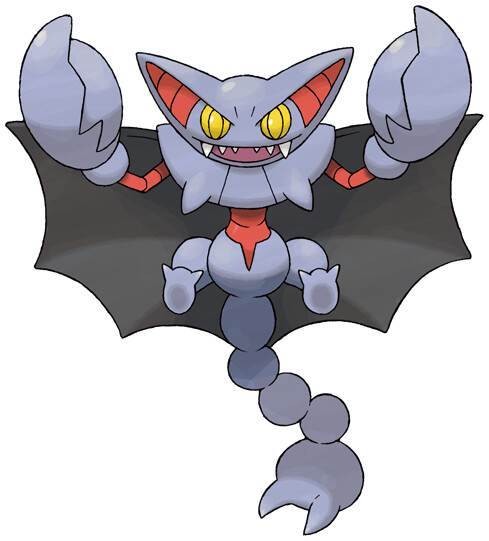 Gliscor is a Ground & Flying Pokémon which evolves from Gligar. It is vulnerable to Ice and Water moves. Gliscor's strongest moveset is Wing Attack & Earthquake and it has a Max CP of 2,692.

"Its flight is soundless. It uses its lengthy tail to carry off its prey... Then its elongated fangs do the rest."

Earthquake can deal huge damage with STAB, offers wide coverage, and it's a must as the only truly hard-hitting move available to Gliscor.

Night Slash is valuable for the speed, only requiring 35 Energy, as well as the Dark-type coverage and the 10% chance to buff Gliscor's Attack stat by 2 stages at each use. Aerial Ace benefits from STAB and is also cheap to use. Sand Tomb deals pathetic damage, but its utility is to debuff the opponent's Defense stat and baiting shields.

Gliscor is a very interesting Pokemon in PvP, and a difficult one to use. A high Defense stat gives it good bulk, while its Flying/Ground typing causes it to only have two weaknesses (including a double weakness to Ice). Gliscor's moveset isn't anything too spectacular, but access to the powerful Earthquake makes it valuable against Steel tanks. The struggle of navigating around ubiquitous Water Pokemon is, however, a major issue for the flying scorpion, which often has to shield bait with its cheaper charged moves to land Earthquake, reiterating the difficulty surrounding its use. Overall an underused pick that can definitely catch opponents by surprise, but not without major drawbacks limiting its overall performance.

Gliscor has its perks in Ultra League, threatening Steel-types with Earthquake and dealing damage to Giratina with Night Slash. Unfortunately its moveset isn't strong enough to brute force its way through many neutral matchups. Ice-types including the popular Lapras are also Pokemon that Gliscor must avoid, and Togekiss notably walls it completely. While it can still do well, more popular meta picks tend to do it without being as picky about their matchups.

With a max CP of 2692, Gliscor lacks sufficient stats to perform well in Master League. However, the key coverage mentioned above impressively makes it a viable option here too.