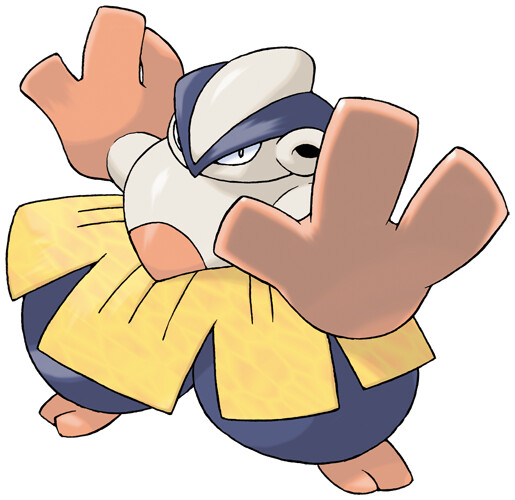 Hariyama is a Fighting Pokémon which evolves from Makuhita. It is vulnerable to Flying, Psychic and Fairy moves. Hariyama's strongest moveset is Counter & Dynamic Punch and it has a Max CP of 2,829.

"Hariyama practices its straight-arm slaps in any number of locations. One hit of this Pokémon's powerful, openhanded, straight-arm punches could snap a telephone pole in two."

Counter is one of the best fast moves in PvP, and Hariyama takes advantage of it with STAB. Bullet Punch is a good move stat-wise, but Steel typing isn't very meta-relevant.

Close Combat is one of the most powerful charge moves in the game, and doesn't cost a lot of energy to use. The downside is a significant DEF debuff on the user, which makes it risky to use. Superpower performs similarly with less damage output and 5 less energy cost. However, a -1 ATK debuff (and -1 DEF debuff) can put Hariyama in a very bad spot since it could reduce the potential of finishing off the opponent. Heavy Slam isn't particularly exciting, but does offer extra coverage, especially against Fairy-types.

Hariyama is a mono-Fighting type featuring average bulk, and a very narrow but powerful moveset. Access to both Superpower and Close Combat give Hariyama two strong choices to threaten significant damage to anything that doesn't resist Fighting-type attacks, but also makes Hariyama a risky choice due to the debuffs applied on the user. Unfortunately competition with Toxicroak and Medicham makes it difficult for Hariyama to stand out among them, but it does have niches against certain Pokemon like Skarmory.

Hariyama acts as an excellent bodyguard for Giratina, being able to overcome almost every Dark-type eligible, and also sporting wins over every Steel-type in this league. However, Hariyama stands a little below other Fighters like Machamp because of its lesser coverage, and it has little hope of fighting back against Giratina or Psychic-types in this league.

With a max CP of 2829, Hariyama lacks sufficient stats compared to many other Pokemon in this league. However, with its powerful moveset it can still manage to win against several meta picks that are weak to Fighting. Being able to outspeed Machamp and narrowly beating Dialga are definitely perks, but the risks from its self-debuffs makes it difficult to use.