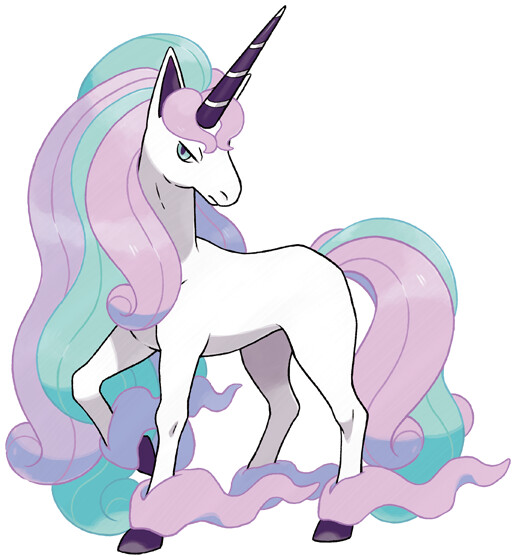 Rapidash (Galarian) is a Psychic & Fairy Pokémon which evolves from Ponyta. It is vulnerable to Poison, Ghost and Steel moves. Rapidash's strongest moveset is Fairy Wind Fast & Psychic and it has a Max CP of 2,461.

"Rapidash usually can be seen casually cantering in the fields and plains. However, when this Pokémon turns serious, its fiery manes flare and blaze as it gallops its way up to 150 mph."

Psycho Cut features high energy generation and low damage output, despite benefiting from STAB. Fairy Wind is very similar, though its coverage is worse when backed into a corner by Poison-type Pokemon. Low Kick is a Fighting-type move which provides valuable coverage, but its stats are so poor that it's considered one of the worst moves in the game.

Body Slam costs the least amount of energy, has a respectable 1.71 DPE (Damage Per Energy), and can be spammed very frequently. The differences between the rest of Galarian Rapidash's charge moves are somewhat minor, and mostly depends on what coverage is preferred. Psychic takes advantage of STAB to out-damage Megahorn in neutral fights, while Play Rough requires 5 more energy to provide its Fairy-type coverage.

Galarian Rapidash sports a high ATK stat and relatively poor bulk in comparison to many meta picks in this league. While its moveset features an appealing Psycho Cut + Body Slam combo that can spam charge moves very quickly, all of its entire viable movesets are resisted by Steel-type Pokemon. The lack of damage output from its fast move is also discouraging, as it limits Galarian Rapidash's ability to farm down low HP opponents. Overall this Pokemon isn't likely going to challenge the meta in any significant way, and is mostly a niche pick.

With a max CP of 2461, Galarian Rapidash just makes it under the CP cap of Ultra League. Play Rough is very likely the charge move needed due to the ubiquitous Giratina, being completely walled if Megahorn is picked instead. The case for Megahorn are the common bulky Psychic-types in this league. Due to its fragile bulk however, Galarian Rapidash may have a difficult time standing out amongst the meta.