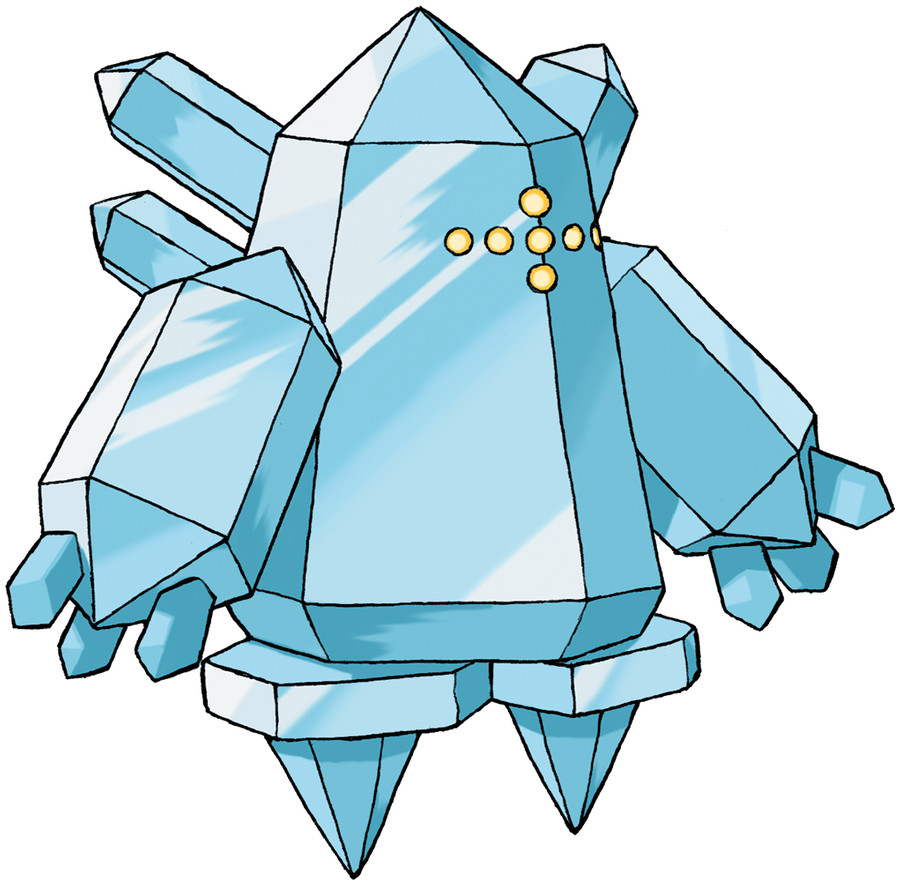 Regice is a legendary Ice Pokémon. It is vulnerable to Fighting, Rock, Steel and Fire moves. Regice's strongest moveset is Lock-On & Blizzard and it has a Max CP of 3,122.

"Regice's body was made during an ice age. The deep-frozen body can't be melted, even by fire. This Pokémon controls frigid air of -328 degrees Fahrenheit."

Lock-On + Blizzard and Earthquake or Thunder*

The addition of Lock-On is a significant improvement for Regice, featuring the best energy generation in the game with 5 EPT (Energy Per Turn). While its pitiful damage output of 1 DPT (Damage Per Turn) is often too low to farm down an opponent, the massive energy gains are needed for Regice's expensive charge moves.

Blizzard is Regice's STAB move, although its cost is sometimes too prohibitive to be used freely. Both Earthquake and Thunder are viable coverage options when used alongside Blizzard, providing nearly unresisted combinations. Earthquake has a lower energy cost than Blizzard and helps cover Regice's weaknesses to Rock, Fire, and Steel. Thunder has a slightly lower energy cost than Earthquake and provides Regice with the ability to destroy Water-type Pokemon. Focus Blast provides good coverage, but its expensive cost makes it unwieldy to use.

Regice shares similar traits that the other Regis have: high DEF stats, which results in good bulk. Unfortunately a mono-Ice typing is arguably one of the worst defensive typings, resulting in no resistances at all other than against other Ice-type attacks. Access to Lock-On gives Regice the much needed energy gains to fuel its expensive charge moves, and its wide coverage allows it to threaten much of the meta with its, heavy-hitting moves frequently. Overall a powerful and expensive Pokemon, but without any significant resistances its survivability is more limited than other picks.

In the Ultra League, Regice's huge defense starts to come into play, making it a wall of a Pokemon with good overall coverage on the main core picks. With massive energy gains from Lock-On, Regice can leverage its strong charged attacks to rack up huge damage and clean out the opposing team while refusing to faint. Just be aware of the fact that it has a number of prominent weaknesses and only one resistance itself.

With a respectable stat product and unresisted coverage between Blizzard and Earthquake, Regice is a surprisingly effective generalist in the Master League. Not only is its charge move combination unresisted, it deals super effective damage against many of the Master League mainstays such as Giratina, Dialga, Lugia, and Melmetal.  In January 2022, Regice gained Thunder as an alternative coverage move, allowing it to dent and potentially defeat Kyogre and Ho-Oh. As such, it can perform well as a safe switch, putting up a fight against almost anything thrown its way. Its powerful moves are also effective at closing games.

Regice suffers from several flaws that keep it from becoming a top tier threat. Its excellent bulk is somewhat diminished by its lack of resistances and its weaknesses to common attacking types. Combined with Lock-On's absolute lack of fast move damage pressure and the rather prohibitive costs of Blizzard and Earthquake, Regice's theoretically positive matchups can be inconsistent, especially when shields are in play. It also has tough competition as a generalist from Mewtwo and Zacian due to their cheaper charge moves and higher damage output.