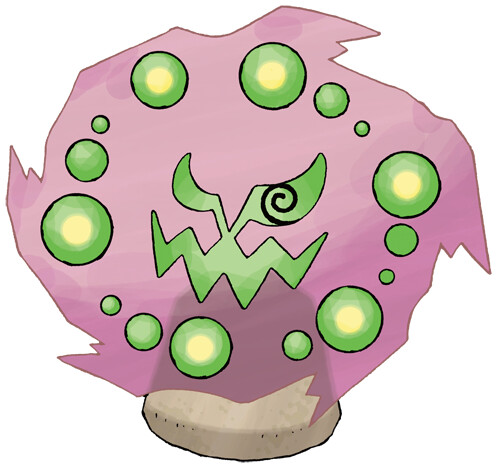 Spiritomb is a Ghost & Dark Pokémon. It is vulnerable to Fairy moves. Spiritomb's strongest moveset is Feint Attack & Shadow Ball and it has a Max CP of 2,072.

"It was bound to a fissure in an odd keystone as punishment for misdeeds 500 years ago."

Sucker Punch and Feint Attack are almost identical. Feint Attack sports the average 3.0 DPT (Damage Per Turn) and 3.0 EPT (Energy Per Turn), while Sucker Punch trades 0.5 DPT for a slight increase of 0.5 EPT. While this may seem insignificant on paper, in practice the slight energy gain that Sucker Punch provides means it's able to get off a charge move sooner before fainting. It should also be noted that both fast moves deal 4 damage per hit in almost all Spiritomb mirror matches in Great League, which makes Sucker Punch the better choice in that scenario.

Shadow Ball has a very respectable 1.8 DPE (Damage Per Energy) and is the main threat that Spiritomb provides. Ominous Wind can be used to bait shields and possibly proc a two stage stat buff, but otherwise doesn't do as well with only 1.3 DPE. Shadow Sneak is one of the worst charge moves in the game.

Spiritomb was introduced during the 2018 Halloween event, and subsequently forgotten about until a few months later. If you didn't start the "A Spooky Message" research quest line by November 1, 2018, you're kinda out of luck as it's currently unobtainable. While it might be difficult to find someone who's willing to trade away their only Spiritomb, your efforts might be worth it as Spiritomb is one of the best contenders in Great League. What makes Spiritomb a very solid pick is its very unique typing, which is shared by another Great League powerhouse: Sableye. Dark/Ghost covers its weaknesses very well, leaving it vulnerable to only Fairy attacks. One big drawback to Spiritomb is its cursed moveset. Both of its fast moves are Dark type, while all of its charge moves are Ghost type, which makes Spiritomb very predictable. That said, in general, Sableye just kinda does it better.

Spiritomb's performance in Ultra League is ultimately handicapped by its inadequate stats, which caps its maximum CP at 2072. This severely limits Spiritomb's capabilities and causes losses in many neutral fights, but Spiritomb's unique typing allows it to compete against certain Pokemon weak to its attacks, including the top dog in Ultra League: Giratina. While Spiritomb still loses against Giratina with even shields, the fact that it can severely injure the number one ranked Pokemon in Ultra League gives it an interesting niche.