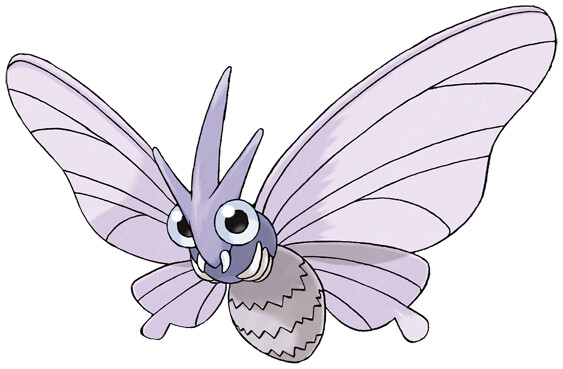 Venomoth is a Bug & Poison Pokémon which evolves from Venonat. It is vulnerable to Flying, Rock, Fire and Psychic moves. Venomoth's strongest moveset is Infestation & Bug Buzz and it has a Max CP of 2,082.

"Venomoth is nocturnal—it is a Pokémon that only becomes active at night. Its favorite prey are small insects that gather around streetlights, attracted by the light in the darkness."

Poison Fang costs the least amount of energy, benefits from STAB, and can be used frequently. Bug Buzz and Psychic both cost large amounts of energy, with the former benefiting from STAB, while the latter provides more Psychic-type coverage.

Venomoth's typing, stats, and moveset relegate it to a position as a counter-pick against many Fighting, Grass, or Poison-type Pokemon. In a neutral setting, Venomoth's performance is best described as "average". It has a few good moveset options, but it's nothing exceptional. However, when facing a Pokemon that it has an advantage against that doesn't have a sub-type that covers its weakness, Venomoth can be a nightmare, taking down threats such as Toxicroak, Wigglytuff, and Meganium hard. This makes Venomoth's greatest use a way to patch up holes in your Great League team, taking out threats that would otherwise take down other members of your team. That said, other Pokemon can punch those same holes and even more, making Venomoth a risky choice outside of limited-type formats such as Silph Road cups.

Venomoth is too weak for the Ultra League

Venomoth is too weak for the Master League