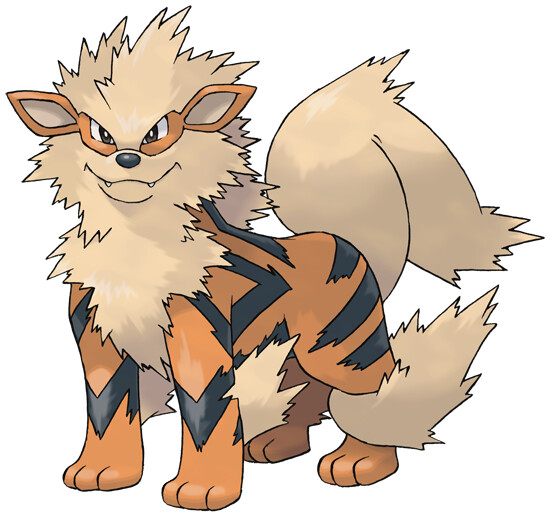 Arcanine is a Fire Pokémon which evolves from Growlithe. It is vulnerable to Ground, Rock and Water moves. Arcanine's strongest moveset is Fire Fang & Fire Blast and it has a Max CP of 3,029.

"Arcanine is known for its high speed. It is said to be capable of running over 6,200 miles in a single day and night. The fire that blazes wildly within this Pokémon's body is its source of power."

In most situations, Snarl is the superior fast move due to its neutral coverage and superior energy generation, though Fire Fang gets STAB and allows Arcanine to act as a Fire Type attacker to a greater degree. Thunder Fang can be used to surprise Water-type Pokemon, but this likely isn't enough for Arcanine to win due to its poor bulk.

Flamethrower (90 Power/55 Energy) is a decent Fire-Type STAB move, while Wild Charge (90 Power/50 Energy) provides important coverage and is an objectively good move on its own. Bulldoze provides useful coverage, but giving up other charge move options may not necessarily be worth it.

While the previous moveset focuses more on a generalist approach, this moveset has a greater focus on Arcanine's performance as a lead. Fire Fang has good power and okay energy gain, which allows it to combine with the lesser energy of Crunch (70 Power/45 Energy) in order to produce shield pressure. Wild Charge is preferred in the final slot due to its ability to punish counters, though Flamethrower is also an option if additional fire-type coverage would be beneficial for an expected matchup.

Arcanine does not perform well in the Great League. The CP drop needed basically cuts its power, which is more tilted towards Attack, in half. Sadly, the "Legendary" Pokemon should generally not be chosen for most Great League teams.

Arcanine does a bit better in the Ultra League, where its CP isn't eaten into quite as much. It has the tools to act as a decent general-use Pokemon or a shield-shredder, and it also has fairly wide coverage and counter-coverage in its Charged moves, making it a bit of a wild-card. However, it doesn't have much of a niche in the tier aside from its surprise factor.

When its power is fully realized, Arcanine still doesn't make many waves due to just what it's up against. It does have a somewhat unpredictable moveset, and it has a few key matchups such as Metagross and Gyarados, but other Pokemon can fill the same role to a better degree.